What Is No Till Farming

What is the definition of no till farming? Simply put, no till farming is the practice of planting crops without tilling the soil. Also known as “no till planting” and “zero tillage,” no till farming first became popular in the United States after World War II.

Tilling the soil, also known as tillage, is the conventional way of preparing the soil for planting by digging, stirring, and turning it over. Typically, the soil is turned over with an implement to a depth of several inches or more, which usually requires two or more passes over the field. Tilling kills unwanted plants and buries mulch, leaving behind a barren soil. Conventional tilling is more time-consuming and can even lower the quality of the soil, causing soil compaction, and leading to soil erosion.

No till planting makes sense because there are less steps involved, thus your productivity is higher. The soil does not have to be tilled. Instead, the seeds are planted through the remains of previous crops by planters or drills that cut a V-slot (seed furrow), place the seeds, and close the furrow. 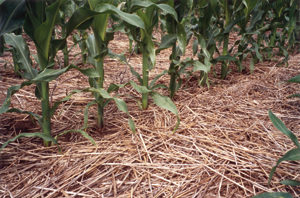 This no till stand of corn is nearly perfect.

Most planters and drills on the market today were not designed specifically for no till farming. And even the ones that were (such as the John Deere series 50, 60, and 90 drills), could use improving.

At Exapta, we design and manufacture add-ons, attachments, parts, and equipment to make no till seeding easier, more efficient, and more profitable.

For more information on zero tillage farming, you can read our no till farming facts.  If you’d like to learn how we can help you improve your crop yields with no till farming, call (800) 417-8020, or e-mail info@notillagriculture.com.

Note: Exapta is located in Salina, Kansas, USA. We ship no till products, parts, and equipment throughout the U.S., Canada, and the world. 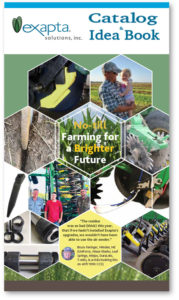